There are wonderful resources on how to create great characters. There are books and articles. There are unforgettable characters in literature to tap and learn from.

All this enchants me. But also scares. Or even terrifies at times.

Ever since I heard “It’s all about characters.” and “If the reader can’t sympathize with your character then your book is doomed.” I’ve been scared that the characters I create are not good enough. And since I saw my reflection in them, then I wasn’t good enough either.

Things that happen when writers dive into the world of their characters. Yes, as I was going through checklists of what makes a great character, I started scrutinizing and criticizing my characters. But there were also gaps in time when I forgot my worries and forgot those warnings. I just wrote and was inside my characters’ world. I worried about them, I argued with them. Hmm, actually not quite. Some of them started arguing with me in my head. All by themselves. I had to put some of them to task before they started showing their nature to me. Some became my friends.

And some of them brought people to life who are long gone.

To write about my father was one of the biggest gifts I gave myself. To write about time in his life that I would never have a chance witnessing was unexpectedly rewarding.

An amazing thing happened when I started writing “The Truth About Family” — based on a true story of my father — from the first person. That was strange to do and at first I was writing his story in the third person. Changing to point of view to the first person brought him to life and his younger self started talking to me. Sometimes it felt like he was dictating the words to me. My father became my friend, just as I always wanted and thought was not possible since I was ten, when he died.

But also purely fictional characters in my books — reflecting those I love, meet and cherish, as well as myself — became friends, and their destiny became important to me.

Characters are real. I was reading how my protagonist Hannah in “A Spy’s Daughter” was telling something about her past to another character, and I caught myself thinking, “Oh, this happened to me too!” Then I had to laugh. Of course it did! I wrote this.

Some time later, as I was preparing “A Spy’s Daughter” for publication, my friend Corky, Corinne Rockweiler, whom I met at a conference in Budapest in 2008 and hold dear ever since, sent me a memoir written by her father, where he talks fondly about his wife, who before their marriage used to work at the CIA.

Right after discovering this I wrote to Corky in an e-mail (which I titled Coincidences and other wonderful matters), “Wow, your mother worked with the CIA! I exclaim because of two reasons. Well, not everyday someone works at the CIA. And the second reason is that the mother of the protagonist in my second book (which will be first in a series and which will be published hopefully until the end of this year) was also with the CIA. :)”

After hitting Send, I realized that my protagonist was a fictional character and facts about her were not really facts. So I wrote to Corky, “It’s funny how I talk about my characters as if about real people. ;)”

Corky’s response was so motivating and uplifting. “I often get attached to characters in a book! No reason you shouldn’t see them as real people since you ‘gave birth’ to them :)”

This was a true light bulb to me. My characters are real because I am real!

Why a writer frowns during self-edit. One day during self-edit, I found myself frowning. I love referring to this discovery often. It was amazing and revealing for me. As I considered my frown, I realized that I wasn’t frowning because I was squinting from the loud voice in my head judging my writing as it happens ever so often. I realized that I was frowning because Hannah, my character, frowned too. Because she was in a tough situation at that point of her story and I truly felt for her. I noticed myself adding a few touches to the scene intensifying and making the scene sharper and more vivid.

Observe yourself without judging. You already heard me suggesting this many times, and you will hear me say it again and again.

Observe yourself when you read your writing. And do this without judging yourself.

Then you might discover that although you didn’t explicitly describe some of the character traits of your protagonist or antagonist, you still see and feel them clearly. And in the next moment you understand that they will be as visible for your readers. In their own colours, shades and with their preferred or least liked eye colour and other features, but still very vivid.

Your characters are real because you are real. 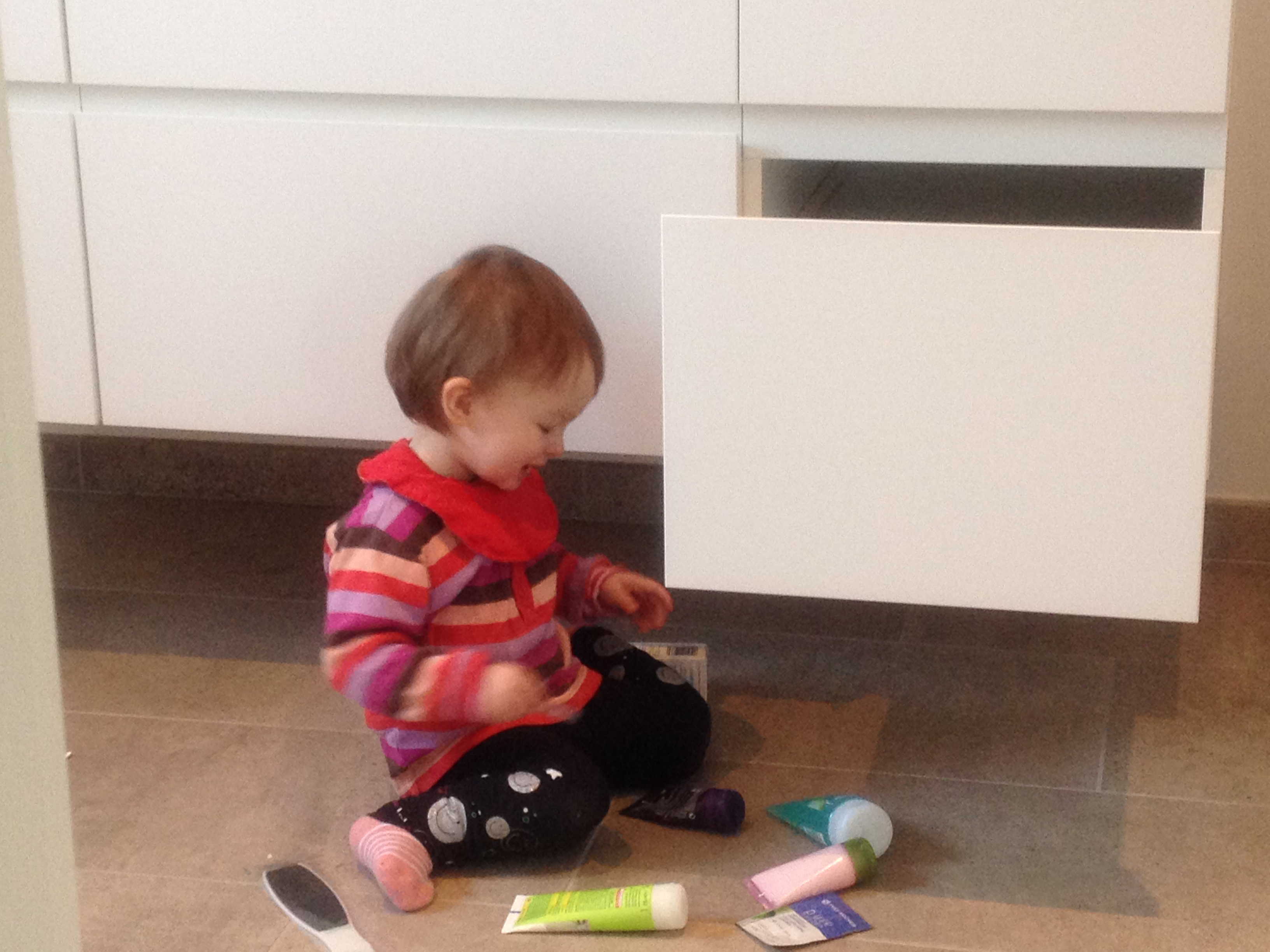 Picture: my daughter Emma rearranging creams and widgets in my bathroom drawer. Her sweet traits will definitely find their way into my characters’ personalities.