After two unfruitful days of planning, Elizabeth headed back to the house.

Well, they weren’t actually days of planning how to get into the house. They were more days of watching TV without watching, walking around London without looking and worrying that she was about to make another big mistake.

That’s what all her friends in Germany told her. “You’re are making a big mistake. What if you don’t find anything or they don’t accept you? Do you know at all who are they? It will be hard to come back and start anew. Everything changes so fast. What if the house doesn’t exist anymore and you don’t find anyone? Why do you have to give up your apartment here? Go for a vacation first and see whether it is worth going there, and then decide.”

But no, what was done was done. It did seem so crazy now, but somehow it happened step-by-step. All by itself.

Elizabeth felt like a dark witch took her hand and led through the darkest times in her life.

Elizabeth and her father shared everything, including the common melancholy. But it was always a sweet melancholy. Or so Elizabeth used to think.

After her father died, the melancholy turned into a bitter and stinking veil spoiling every smile, every warm word of compassion addressed to her.

From there, all went down hill.

Only three months after her father’s death, she was given notice. Partly because her boss had quit and the half of department were let go, and partly because she lost all the interest in the job she loved until the day her father died.

It was him she found and done this job. He was a big fan of numbers and facts. So she went and studied statistics at the University in Dortmund and became an associate professor there.

But after he was gone, what was the meaning in all those numbers?

Her friends were tired of all the facts and trivia she was reciting.

All of them were immersed in the particular, as they claimed, problems of their families. They hated when she said that their cases were typical and that at least seven hundred fifty six thousand in Germany alone were in the same situation. Whatever the domestic problem, whatever the anomaly of their children’s behaviour there were always at least one hundred thousand others.

All they said was, “You don’t understand.”

Well, they didn’t understand her now either.

All lost sense when her father died. Even dating. She used to discuss her dates with him and he would cook for her and a more deserving candidate.

She even decided to move with Frank, of whom her father approved.

But then all the world came to a halt when she saw a policeman marching with large steps toward her office with glass door at the end of the long hallway.

“Your father has terminated his life.”

What an awful way to put this into words!

Yes, yes, there was no good way to say this out loud. And it didn’t help to find out that her father had an irreparable case of leukaemia and didn’t want her to suffer with and for him.

All the facts, all the help, all friends, even Frank, even her father’s letter to her, nothing helped.

The first light came when her best friend, Jenny, said, “You never know where life leads you. Maybe there is a meaning in all this.”

With a steaming coffee cup in front of her, and tears in her eyes, Elizabeth asked, “You mean there is a meaning in everything collapsing and burning around me? Haven’t you heard what I’ve just said? Frank left me! I can’t find another job. Even with a PhD title in statistics. Or maybe because of it.”

“So what holds you here then? Go on and travel. You said your father left you some money behind. Wasn’t he originally from Ukraine? Don’t you want to find out more about him and you roots?”

“But I was born in London.”

“Well, London is closer. You can start there.”

And so, she was in London now. In a completely unknown world and city to her. She’d need to look for an apartment here. And maybe even a job.

Jenny of all people couldn’t let Elizabeth’s purse go, as they took farewell at the airport. “You know you can always sleep on my couch, when you decide to come back and until you get your apartment back.”

“Jen, I don’t want my apartment back.”

“But it was so close to mine!”

Elizabeth stroked her friend’s hand holding the purse she got from Jenny on her birthday three years before. “I’ll miss you too.”

“Give me a call, and write to me as often as you can.”

“No! Promise that you will write me even if you don’t find a coffee-shop with a hot-spot and even if stamps cost a fortune.”

But so far all Elizabeth wrote was, “I arrived well and got me a small room in a cosy hotel downtown.”

Elizabeth took the room keys lying on the unsent post-card and went out of the room.

She was going to do everything to have more news until tomorrow.

Picture: Sky over Aalborg this morning. 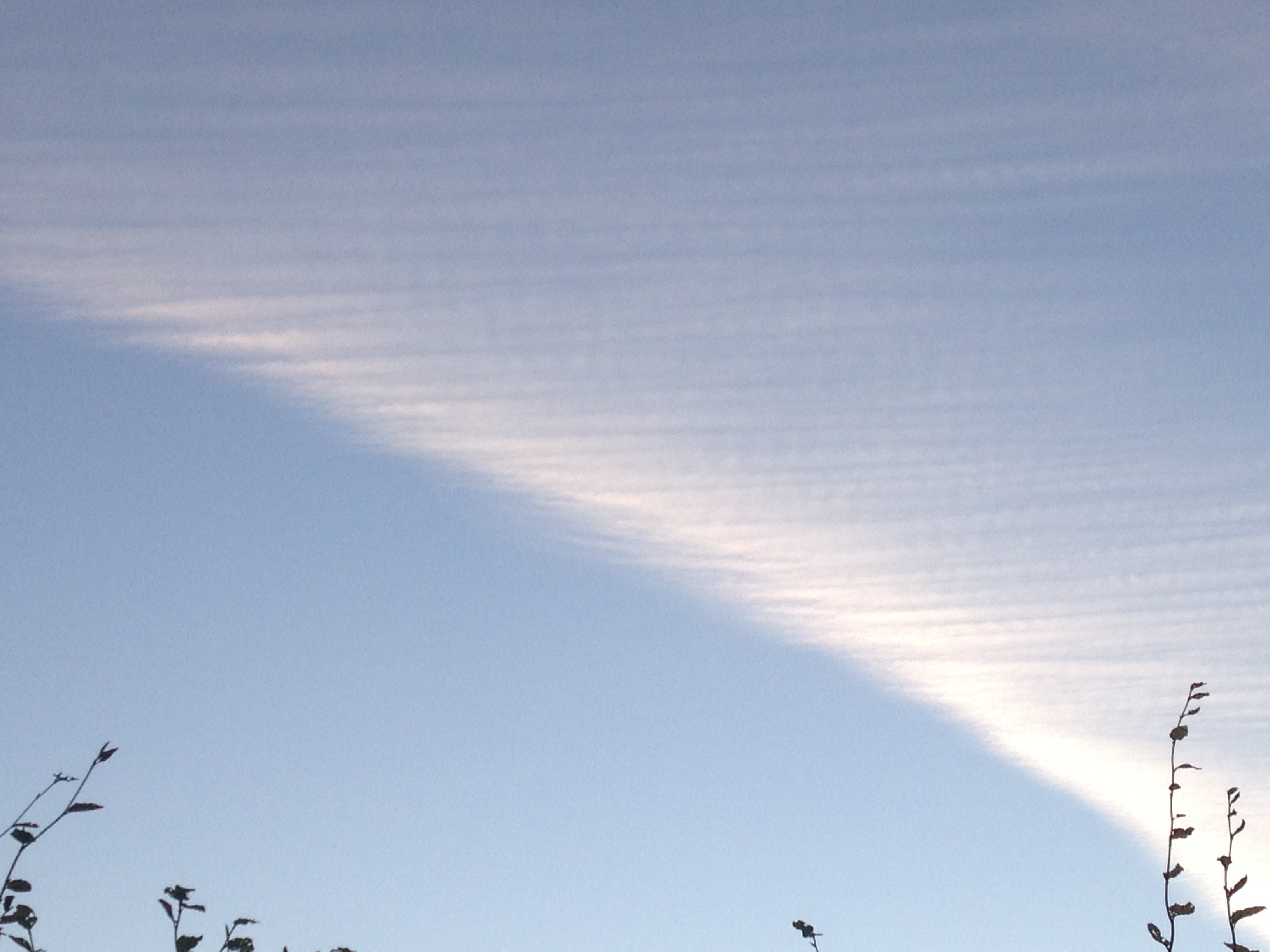 P.S. Chapter 5 will be written and posted in two weeks time.

P.P.P.S. If you think you have friends who could like this story, feel free to forward this story to them.