As for many fresh big brothers and sisters with their mothers and younger siblings, my pregnancy and Emma’s birth was a big change for Niklas. The larger my belly grew the more seldom Niklas wanted me to bring him in the evenings to bed. He preferred his father. And as I guessed that this could have to do with this big change, I promised him that I will do everything in my power to give him time and moments, which will remind him of how it was earlier. Just for him.

Upon this, he immediately asked, “Will you carry me then again?”

I realized then that carrying him in my arms was one of the most important comfort identifiers for him. I said, “Yes, I will. Maybe not as often as before, because you grow bigger every day, but I will carry and lift you at least time to time. I’ll surprise you. OK?”

He smiled and nodded.

So, two days ago, I suggested to carry him from his room upstairs to the living room.

Except he didn’t. He wrestled playfully with me, while I tickled him. After a few suggestions to go downstairs and explaining that Emma was there and without a baby-alarm we wouldn’t be able to hear her if she cried, Niklas still stayed in bed and played with his duvet. I realized that he didn’t want to walk the stairs. So again I suggested to carry him.

“Are you sure?” Niklas looked at me, his eyes fixed on me.

“Yes, the doctors allow it now and I feel well enough. I would like to try, if you are up to it,” I said.

After a few steps, his sweet head appeared on my shoulder and Niklas tried to look into my face. “Mama, are you OK? Is it going well for you with carrying me?”

My heart melted. “Yes, sweetheart, it works very well. And for you?”

“Yes, for me too. And when I will become an adult and be big as Papa, I will carry you.”

Picture: A sequel to the picture posted two weeks ago. This picture was taken when Niklas noticed me taking pictures of him and Emma. The picture’s quality is not very good since I caught him in the act, but his smile was perfect and absolutely infectious. I had a big smile on my face behind the camera. 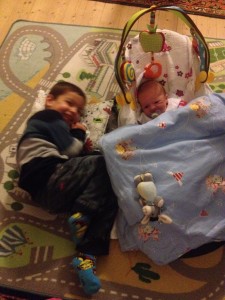