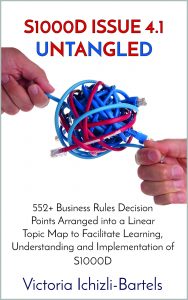 In a book I published earlier this year I wrote the following:

“Not many want to think about terminating the existence of their product or service, hoping it will be there forever.

But it won’t. At least not in its very first shape or version. Besides, the updates might be so crucial that at some point you will have something entirely new and different than merely an upgraded product or service.

I can guarantee that sooner or later you will need to discard one (and most probably more) of your products or services or various parts of them.”

“Take Control of Your Business: Learn what Business Rules are, discover that you are already using them, then update them to maximize your business success.”

I didn’t think I would need to terminate one of my books that soon after the start of my business (not yet two years), but I know it is a correct decision.

What happened is the following. Last year I published a resource for the S1000D community titled “S1000D Issue 4.1 Untangled.” It arranged 552 Business Rules Decisions Points (BRDP) defined by the specification and also added several new ones into a sequential chain for the S10000D implementation. The book was very well received by the community.

This year I have published a follow-up resource named “S1000D® Issue 4.1 and Issue 4.2 Navigation Map.” It could not serve as a new edition of the “S1000D Issue 4.1 Untangled” because this time the book covered two issues of the specification and also showed the relationship between them when it came to the Business Rules Decision Points.

The “S1000D Issue 4.1 Untangled” continued to sell after the publishing of the second book. I realized that it only sold because of its lower price and that situation didn’t feel good.

To compensate for the possible inconvenience, I have considerably reduced the price for the “S1000D® Issue 4.1 and Issue 4.2 Navigation Map.”