This is what happened last week. I picked Niklas from kindergarten and we took a bus to go home. Niklas was happy to see that his favourite seats right behind the driver’s cabin were free.

As soon as we set down Niklas looked up and saw a poster with speech balloons all over it, similar to the one we discovered a month before, where each of the balloons were of bright and different colour. Niklas asked me to read the text on the poster. As I read, we discovered that again all of the speech balloons, except one, had a phrase staring with Thank you.

“Thank you that you reduced the volume of the music you listen to. It is a great style!”

“Thank you for helping the woman with the stroller. It is very kind of you!”

“Thank you that you greeted the driver when you entered. It’s a great style!”

The special one of the balloons had the following text:
“This is for you, who is on your way to a job interview. We cross fingers for you!”

I couldn’t stop a big smile widening my face.

And then I recalled the special speech balloon from the poster Niklas and I saw a month before. “This is for you, who is coming from the hairdresser’s. You look great!”

I reminded Niklas of that one and we both grinned. Right after that Niklas asked me to read all of the text on the poster again.

Picture: Niklas and I share the love for buses. This picture was taken in Cambridge last year in front of a double decker. We were thrilled to discovered that Niklas’s toy bus had the same number as the bus we saw on the street we were walking. 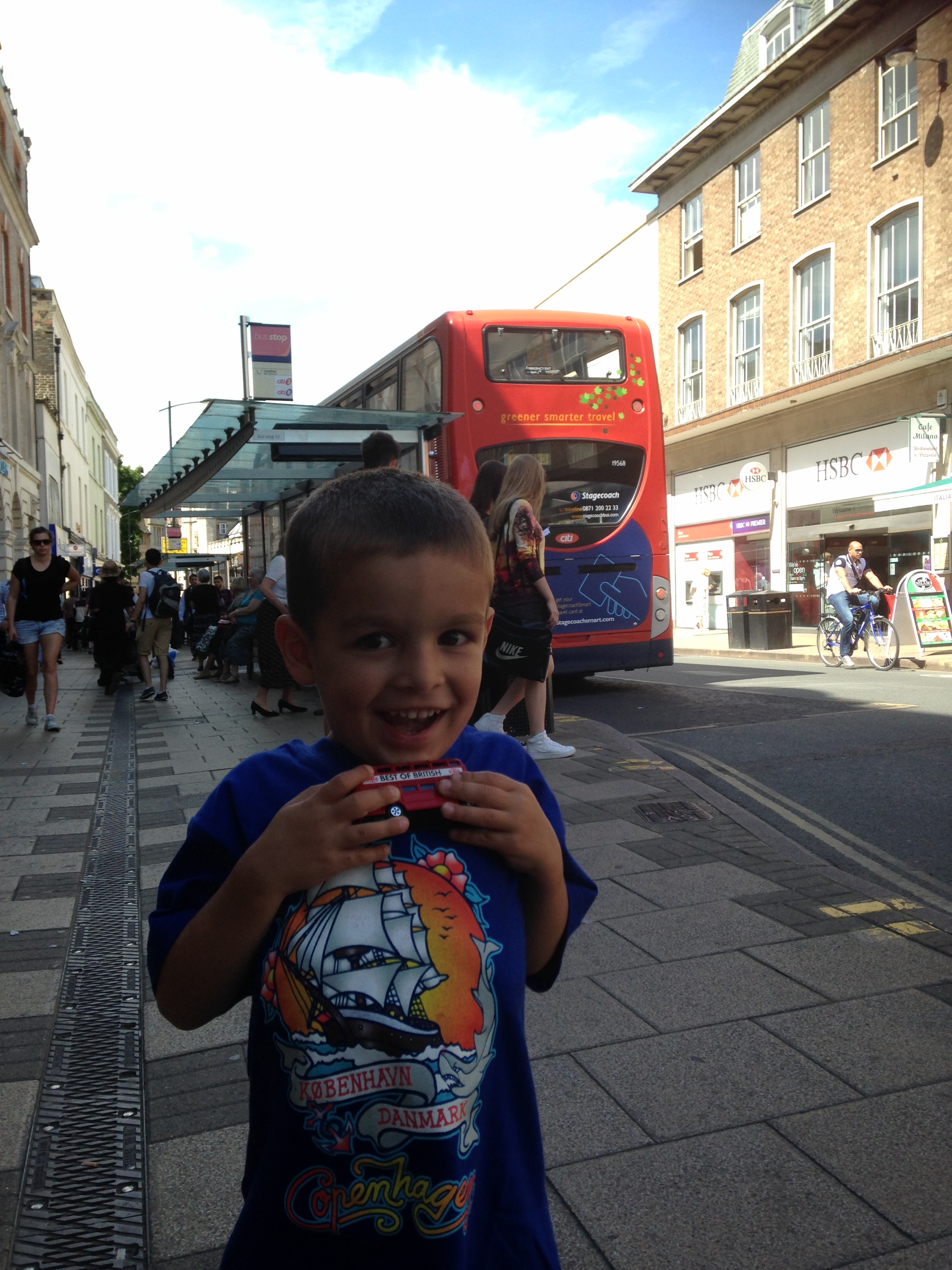 P.S. The story “Nothing is Like it Seems”, which I started posting last week, will be continued next week. I will be posting this story bi-weekly until it finds its end.

If you are interested to see how I came to write this story then take a look at this link and this one too.

The Chapter 1 has been posted already some time go (see one of the links above or here). I have made several editorials and added a new chapter.

Note: the first paragraph in chapter 1 is coming from the bestselling novel by Menna van Praag “The House at the End of Hope Street”.

The house has stood at the end of Hope Street for nearly two hundred years. It’s larger than all the others, with turrets and chimneys rising high into the sky. The front garden grows wild, the long grasses scattered with cowslips, reaching toward the long-hanging leaves of the willow trees. At night the house looks like a Victorian orphanage housing a hundred despairing souls, but when the clouds part and it is lit by moonlight, the house appears enchanted. As if Rapunzel lives in the tower and a hundred Sleeping Beauties lie in the beds.

Elizabeth’s hands dropped to her sides and her mouth opened.

Was this really the house she searched for? The house she came to, to find the answers. It looked nothing like the tall Gothic clog of the house with rain stains below its spiky turrets rising up in a war declaration.

Nothing like the house she remembered from her childhood. The childhood she’d tried to forget, but didn’t manage.

Except one single gap. Something so immense that it erased itself from Elizabeth’s memory.

Something that made her the person she was today. Sad, pale, with lips pressed into a flat circle of a cold copper coin.

She came in the middle of the night, because she couldn’t face the house in the daylight after so many years. And now she was glad she did so. If this house glowed now, in the moonlight, how would it look like during the day?

Elizabeth drew a deep breath and kept the aroma, coming from the wild roses that framed the door, inside her for as long as she could.

As she let the air out a sudden fear wrapped her into its icy arms. She came to find answers. At least she planned to do so tomorrow during the day. But this house, this fairy tale house surely couldn’t reveal anything. Someone new and good lived here. They were probably unaware of the torture and agony whirling inside this house when her family lived in it.

Elizabeth pointed her intent look at the door both hoping and fearing someone to come out.

And then she suddenly relaxed. Whether it was another gulp of rosy air, or the peacefulness of the street around her, or both, it made Elizabeth lower herself onto the fence base and lean on the metal vine branches behind her. She looked at the house.

Something must have happened here. Was this during this gap she was so keen to close? Maybe, whoever lived here knew what happened?

It must have been something big and terrible, she thought. Like a hurricane.

Only a hurricane had the ability to remove everything and leave an empty space for something new to grow.

Was she and her father part of this hurricane? Elizabeth realized that she both hoped and dreaded this.

Elizabeth opened her eyes and squinted at the light shocking her with its brightness.

A sharp pain in her neck made her cringe as she tried to support herself on her hands stretching her arms into vertical pillars. She was surprised to find herself sitting.

Elizabeth raised her head and saw a young man, maybe her age, maybe a bit younger, bowing slightly over her.

The man took a step back and frowned.

“Here.” The man gestured behind him. “In this house. The question is what are you doing here?”

“I …” House? Elizabeth tilted her head and looked behind the man.

Oh no! Was she here all night?

“I …”, she said again. Say something, say something. I might as well tell the truth.

She drew a deep breath and ventured. “I was looking for the house from my childhood … and it is … it is this house. I hoped I could find out what—”

“What?” Elizabeth focused at the man in front of her.

His concerned look evaporated and gave place to a gaze of steel. Somehow the house seemed to become a bit darker now, even in the bright sunshine. “You are mistaken. This is not the house you are looking for.”

“Because this house have been my family’s property for centuries. And I surely don’t know you.”

“But I am convinced that I got the correct address. At least from my memory.” I shouldn’t have said that.

Elizabeth sat a bit straighter on the fence behind her. How did she sleep here all night?!

She drew a deep breath and said, “I found the house immediately, even in the dark and I remember it well.”

“I said no. Please leave this property. Now.”

The man took a step closer to her. Now he looked older than she was. And stronger. Much stronger. Elizabeth felt goose bumps all over her body and shivered.

She stood up. She thought of another attempt, but the look in the man’s eyes made her change her mind. There wasn’t a gate on the intricate fence. Elizabeth could bet that the man would slam it shut otherwise.

She needed to think of another plan to find out what she was looking for.

P.S. You can find the whole story at this page.

Picture: Roses in my grandparents’-in-law garden. 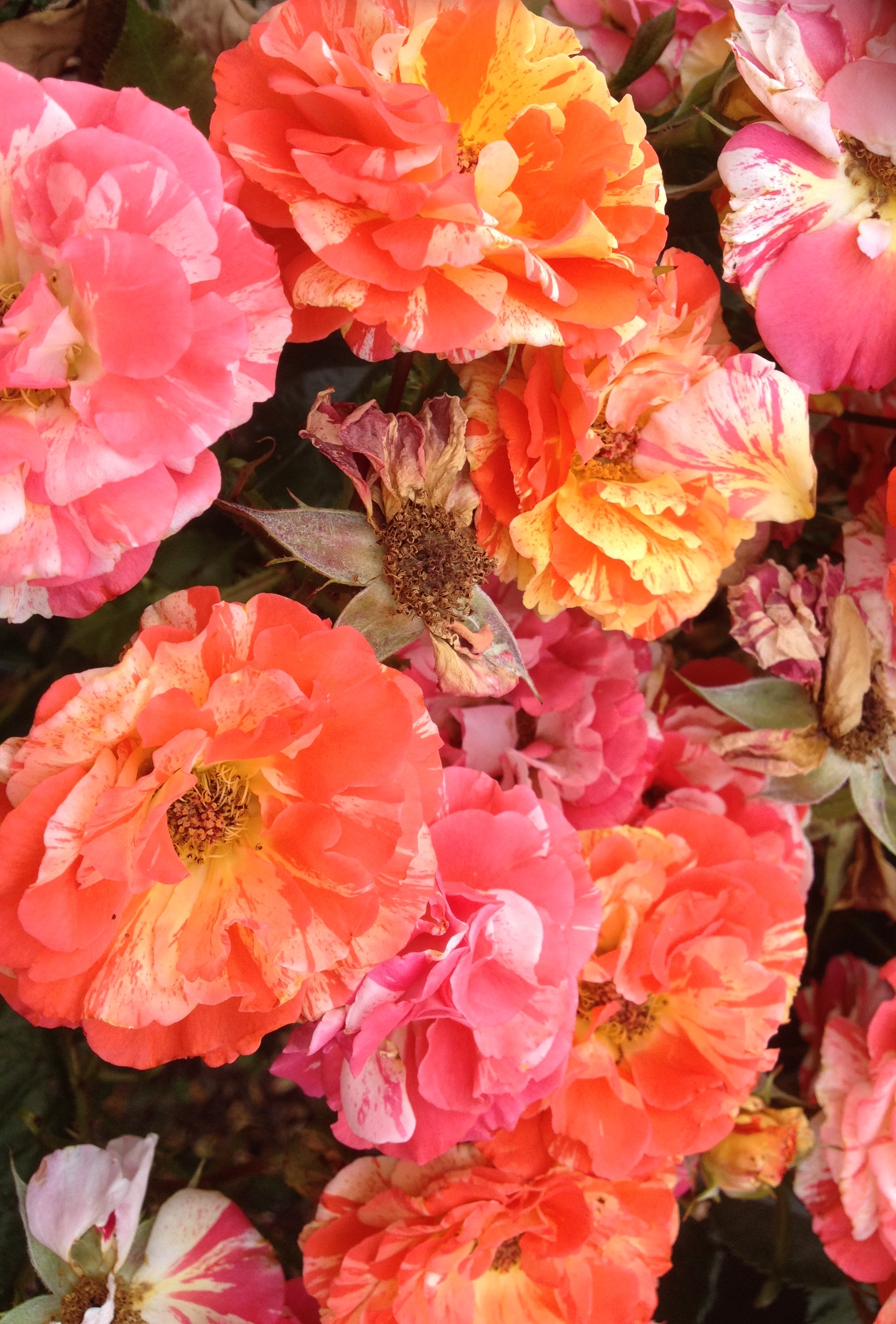 My job as a mother

As any mother, with the birth of my first child I have signed up for the twenty-four seven on-call service. Now with two children, this service doubled within the same time-frame.

Although my fulltime day job as a mother, which I do for the second time in my life, is coming slowly to an end. I can hardly believe that my sweet little Emma will go to a nursery school in a bit over two weeks time. And a few weeks after that I will have another title during the daytime.

But as long as I am a full-time mother, I thought I will share the latest news from my sweet employer’s life.

It is simply amazing to watch Emma grow. When she tries to crawl, pulling all her body with the strength of her arms, when among other words she tries to say “schön” (nice, beautiful in German) by pronouncing it in a sweetest possible way as t-s-c-h-I, when she waves enthusiastically while seeing our two reflections in a mirror.

It is amazing how she takes care of me by allowing me to take a power-nap near her on the play rug in her room, while she plays with the toys spread all around us and without attacking my glasses, as she does when I am awake.

She is an amazing girl and I am so happy to have her, her brother and their father in my life. I am truly blessed.

Seeing my stories develop here in my blog

I am so glad there are words and writing to help me share my life and my imagination with you.

Writing is for me a reliable vehicle to tell you about my life as a mother, and my guess would be that the category “A mother’s diary” is one of the most crowded in this blog.

Time to time I share fictional stories with you here, and I have a news about it as well. Ever since I heard of sites, communities and groups, where books are written in real-time and shared bit-by-bit, I was intrigued to do the same here.

My dear friend and writing teacher Menna van Praag has graciously agreed for me to continue the story prompted by the first paragraph from “The House at the End of Hope Street”. You can read this post here.

So on the next week’s post you will be able to read the continuation of this story, both in a blog post and in one piece from the beginning to the last available sentence. And you will find this on the page “Free Online Books”.

Wishing you all wonderful second half of September.

Picture: Just before I took this picture I tried to distract Emma from our storage room and get her let go of the hand-broom. I’ve have put one of her favourite toys about half a meter away from her in order to elicit her out of the doorway to the storage. A few seconds later I found Emma like this: her beloved cow close to her and the hand-broom in her hands. Why not having it all? 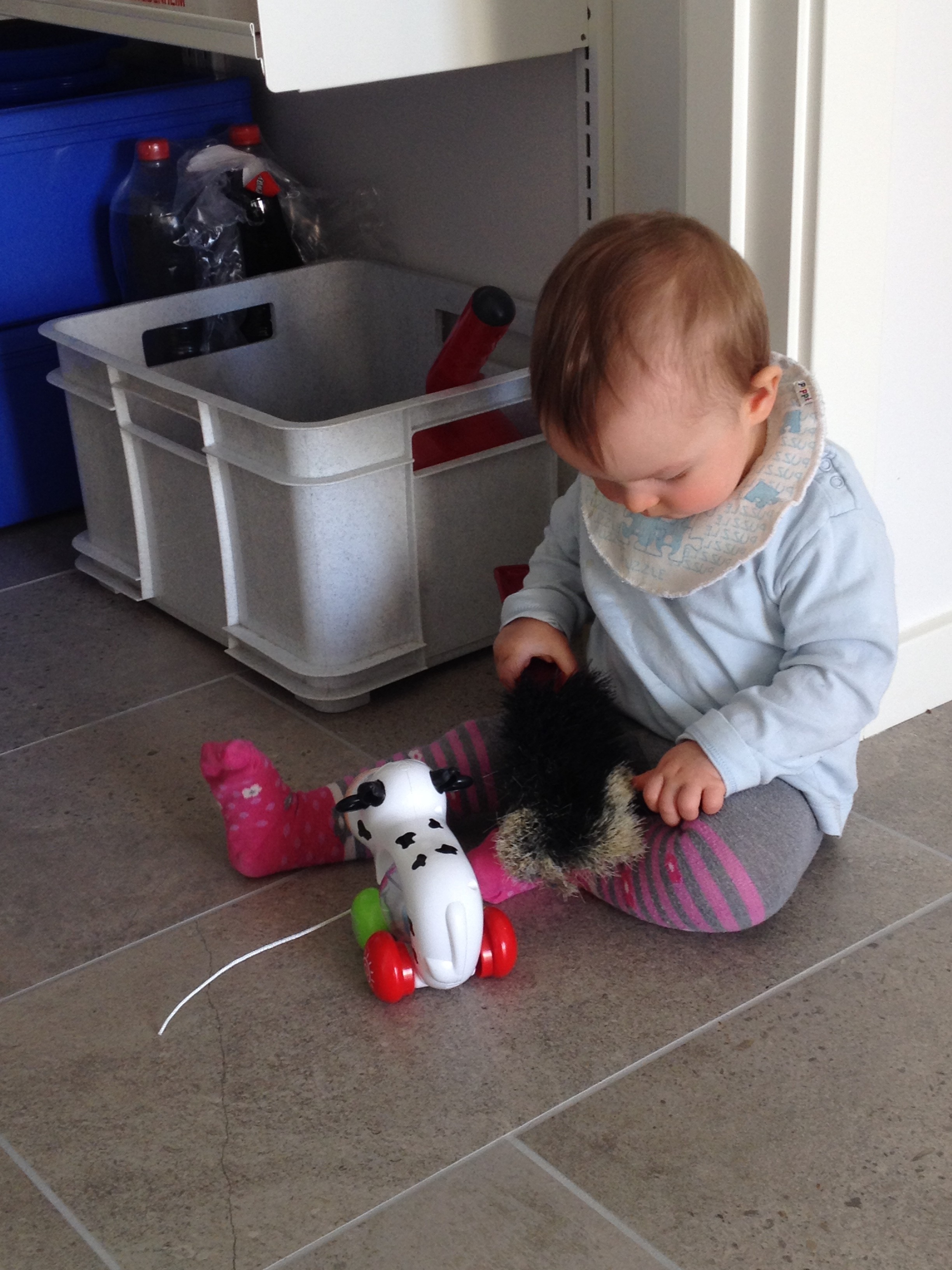 This week’s post is a very short one. A wonderful and inspiring quote about friendship and a great thanks to all who support me and reach out to me. I love and cherish our friendship! Hugs to all of you from Denmark.

Here is the quote as I found it in German:

“The best way to make a friend is to be one for others.”
Ralph Waldo Emerson

Pictures: selfies with two of my truest and most honest best friends — my children, Emma and Niklas. They are like my little mirrors. Most beautiful mirrors. If there is an upset to see in them, most probably there is one in me. And if I smile, they smile too. My family and my friends are the best motivators and reasons to smile and enjoy life as much as possible. 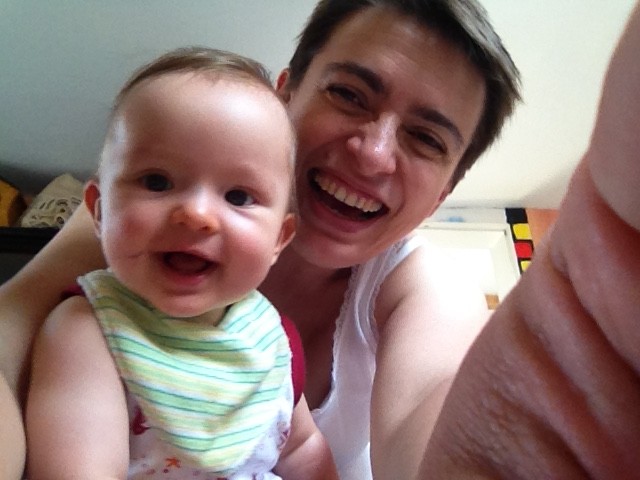 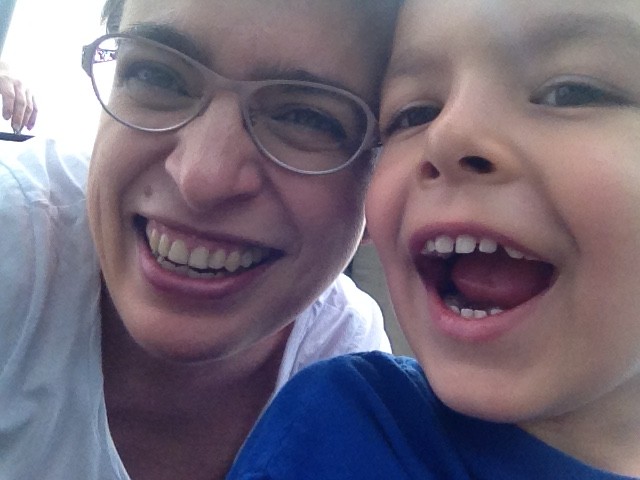