Disclaimer: I am not a game designer. At least not literally.

I wrote a motivational book on how to learn perseverance, to make progress in a long procrastinated project, and  how to do it almost effortlessly.

As I started writing this book, called “5 Minute Perseverance Game: Play Daily for a Month and Become the Ultimate Procrastination Breaker”, I had an idea to structure it in a way a board game description is structured. So I took a description of a game my husband gave me as a Christmas gift last year and put it beside my computer on my desk.

Then I also looked for the books addressing the game design.

I must admit, I haven’t finished reading either of the books yet. Instead, I enjoy them in bits and pieces. And every time I read in them, a light bulb comes connected to my work.

A few words on my background. Most of the time in my over 20 years working career, I had to address in one way or another various management tasks, including planning and development of the operational processes, quality assurance procedures, in areas ranging from solid state physics and semiconductor device manufacturing to information technology, business process design and configuration management. Now as an owner of my own business, besides the project and time management, I also carry out reportedly the trickiest art of management, the self-management.

While I wrote my book on perseverance, I took a project and imagined I played a game with my procrastinating self to find out who would gather more points, me in making steady progress, with small 5 min-work steps every day, or my procrastination in hindering the progress.

I had so much fun with the game and the initially thought as daunting project that I wondered whether I could play this game also with other projects I have. I called my project book “game book” and started recording there moves for each project-game. The way I recorded also changed depending on how busy my day was with appointments or on my general state of mind. But the fun and curiosity on how I could structure my day and make progress in many of the projects, I need to handle during the same day, were predominant.

Recently I continued reading Brian Tinsman’s book “The Game Inventor’s Guidebook: How to Invent and Sell Board Games, Card Games, Role-playing Games & Everything in Between!” and saw the following passage about Richard Garfield, the inventor of the game “Magic: The Gathering”:

“For years, Richard had been playing around with ideas for a game that was ‘bigger than what came in the box.’ Drawing inspiration from a classic science-fiction strategy game called Cosmic Encounter, he envisioned a game that set up rules, then let every card in the game break them in different ways. Further, no player would really know all the powers every card might have — players would constantly be surprised. Only a genius could bridge the gap between imagining such a game and actually designing it. ‘I had no idea if such a game could be designed.’ Richard recalls, ‘But I decided to give it a shot.’”

“Wow,” I thought, “Isn’t it what a successful manager, a great boss, and a brilliant entrepreneurs are? The geniuses who can bridge the gap between having an idea for a product, service, or the business development and actually doing it and demonstrating how this can be done? And aren’t our daily lives at work (and at home) the games having certain rules but with so many surprises breaking almost each of the rules?”

As I realized that, I sat there for a few seconds with an open mouth. I was in a public place when I had this epiphany, so I hurried to close my mouth and take on a nonchalant look as soon as I observed what I was doing.

A bit later I realized that the more I considered my work as a strategic game the more creative, and actually the more serious about the task I became. Truly serious, that is without drama but with utter concentration and attention for the task at hand. I’ve discovered a new (seeming) paradox for myself. The more I considered my work as a game and took with that care that I had fun while attending to my duties, the more diligent and efficient I became.

I will surely continue playing multiple project games in my working days and I recommend you to do the same. Besides if you are a manager or an entrepreneur, I highly recommend you to research on gamification, but also on game design and learn how to design games.

Here is the list of reasons why I think you should learn how to design games:

Somehow I think you could add to this list. So I’m wondering, have you ever had a similar or maybe even the same epiphany? Do you agree or disagree with the above? Why?

I would love to hear from you and wish you a lot of fun in your daily games.

Picture: My game book of projects. 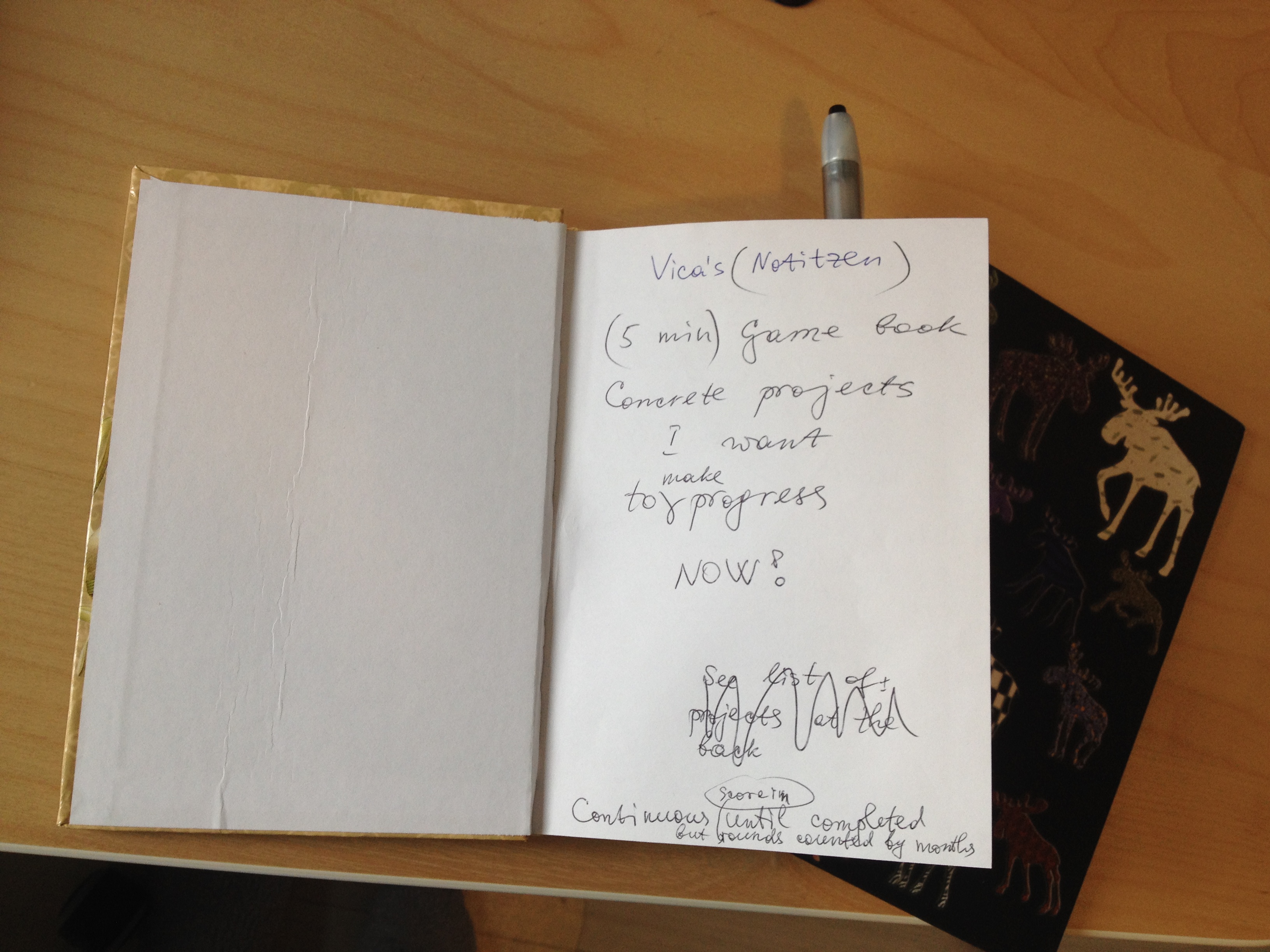 The e-book “5 Minute Perseverance Game: Play Daily for a Month and Become the Ultimate Procrastination Breaker” is available for only $2.99 at:

I’m a huge fan of thesauri. I often consult them to remind me of a meaning of a word or to teach me the meaning of an unknown one. Thesauri are simply vital for non-native writers in a language. They are fun, but they are also brilliantly structured. What can be better than a book structured in alphabetical order? After contemplating how to organize a resource for writers I am currently writing, I chose exactly that structure, the alphabetical one.

I also love studying various books on writing craft. So of course it was just a matter of time for me to discover The Emotion Thesaurus by Angela Ackerman & Becca Puglisi. This resource is one of those I use most while I write the first draft of my books, but especially during revision and rewrites. I highly recommend it to all writers, both of fiction and non-fiction!

I have also a thing about settings. Or rather I often find myself trying to skip their descriptions and resist writing them. Therefore I was thrilled when Angela and Becca asked the fans of their website Writers Helping Writers, whether we would like to join the launch team. Of course I said YES. I am reading now a review copy of the The Rural Setting Thesaurus: A Writer’s Guide to Personal and Natural Spaces and I simply love it. It does take a lot of my fears toward the settings away. And I am growing curious to play with setting descriptions and see how they would change the stories I create.

Below you will find the details on the launch and especially about the fun activities planned by Becca and Angela during the launch week.

If you love thesauri, then join in the fun of sharing and discovering the beauty of English language and languages in general.

In spite of what happened in Orlando, have a wonderful day and week. I truly think that this launch week could help brighten at least a little the heavy times after what had happened.

There’s nothing better than becoming lost within the story world within minutes of starting a book. And as writers, this is what we’re striving to do: pull the reader in, pull them down deep into the words, make them feel like they are experiencing the story right alongside the hero or heroine.

A big part of achieving this is showing the character’s surroundings in a way that is textured and rich, delivering this description through a filter of emotion and mood. It means we have to be careful with each word we choose, and describe the setting in such a way that each sight, sound, taste, texture, and smell comes alive for readers. This is no easy task, especially since it is so easy to overdo it—killing the pace, slowing the action, and worst of all, boring the reader. So how can we create a true unique experience for readers and make them feel part of the action while avoiding descriptive missteps that will hurt the story?

Well, there’s some good news on this front. Two new books have released this week that may change the description game for writers. The Urban Setting Thesaurus: A Writer’s Guide to City Spaces and The Rural Setting Thesaurus: A Writer’s Guide to Personal and Natural Spaces look at the sights, smells, tastes, textures, and sounds that a character might experience within 225 different contemporary settings. And this is only the start of what these books offer writers.

In fact, swing by and check out this hidden entry from the Urban Setting Thesaurus: Antiques Shop.

And there’s one more thing you might want to know more about…. 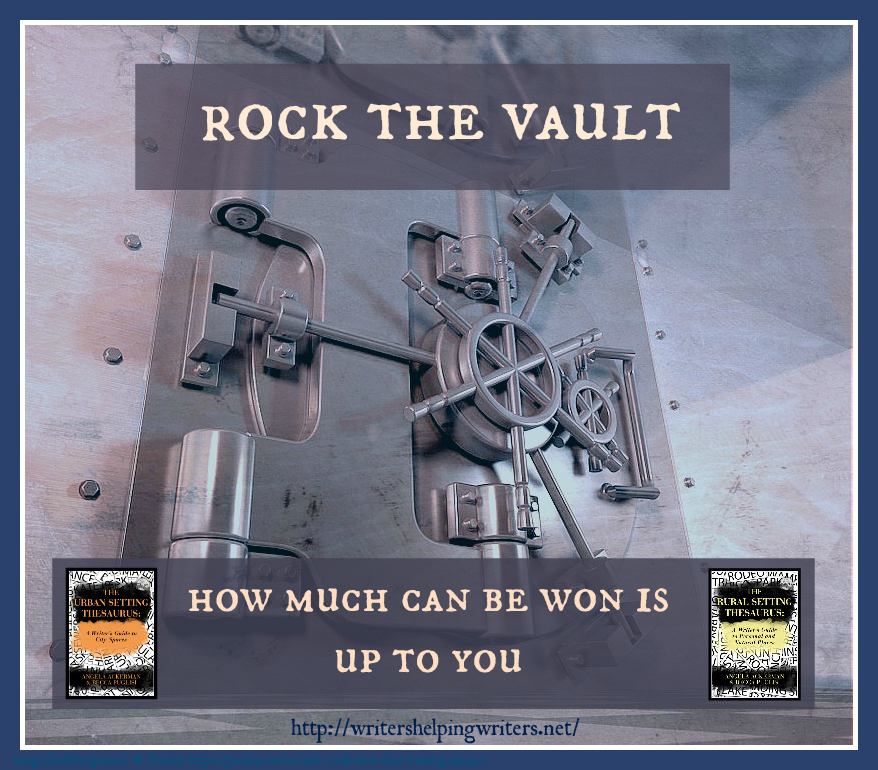 Becca and Angela, authors of The Emotion Thesaurus, are celebrating their double release with a fun event going on from June 13-20th called ROCK THE VAULT. At the heart of Writers Helping Writers is a tremendous vault, and these two ladies have been hoarding prizes of epic writerly proportions.

A safe full of prizes, ripe for the taking…if the writing community can work together to unlock it, of course.

Ready to do your part? Stop by Writers Helping Writers to find out more!