I made an experiment last week. I held two of our juggling soft-balls – Don’t think that I can juggle. I bought them a while ago, so that I could practice to juggle. I am still figuring out when I will start practicing. – One at the height of my hip and another at the point where my mouth is. Then I let them fall.

As you might have expected, the first ball, held at the height of the hip, fell first. To make sure I got the things right, I repeated the experiment. Same result.

Now, I am pregnant with my second baby. As during the first pregnancy and as for many pregnant women, I lost weight at its beginning.

But, and here comes the unexpected, the first place I lost weight on my body, was my face! My hips don’t show any sign of any loss. They are as plump and rosy as ever. Not requiring new tighter trousers. In fact, I need now trousers larger at my waste level.

As former experimental physicist, this took me aback. How could this be? All my knowledge in physics seems to be turned upside down. I mean, I should, as any large subject or object in this world follow the laws of gravity. But my weight doesn’t seem to follow it!

So, I decided to bring out a theory. It goes as follows:

Classical laws of physics do not apply to the change process of the human weight distribution.

The next step is to verify this effect with quantum mechanics and nanophysics. The experiments there might however mean more effort to undertake than the one with the juggling balls.

P.S. It is quite funny what kind of thoughts come to one during pregnancy. And you can stay assured that I really performed the experiment. As written above: twice.

Pictures: My two babies. One as the cutest Spiderman ever, today during Sankt Hans’s celebrations in Aalborg, and another unborn. 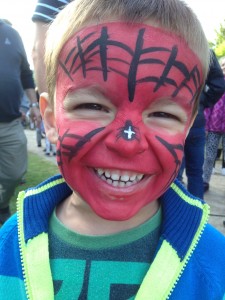 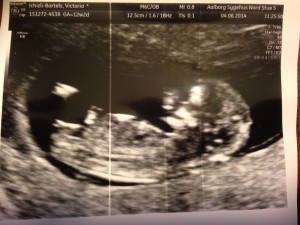