There are times when I don’t like my thoughts. I even remember hating some of them and fretting the fact I had them.

The following quote made me fill my lungs full with air and breathe out with relief:

„They are thoughts that give the soul its color. “     Mark Aurel

This quote and also the work by Ariel and Shya Kane and what they say about including all we done, experienced, thought and not resisting all that, helped me appreciate all the crazy, wonderful, strange, and many other thoughts I had. I understand now that all we have lived through, including thoughts, doings, our Yes’s and No’s, everything, which happened to us and with us so far, brought us to where we are today.

And I do like where I am today. And I like more and more including my thoughts, not resisting them but accepting them as part of my life. Not as something strange and extraterrestrial as I sometimes did in the past and might do in the future. I will just let myself be surprised what things can come to my mind. After all, I know now that I am capable to choose and bring to life some of the thoughts and dreams I have, and I am able to smile kindly at the other and let them be.

I will finish this post with the quote from Audrey Hepburn I rediscovered yesterday:

“Pick the day. Enjoy it – to the hilt. The day as it comes. People as they come… The past, I think has helped me appreciate the present – and I don’t want to spoil any of it by fretting about the future.”

Picture: A selfie I made a few weeks ago. Using Audrey Hepburn’s words she said about herself, I am saying about myself: “I’ve decided I’m not so bad after all.” 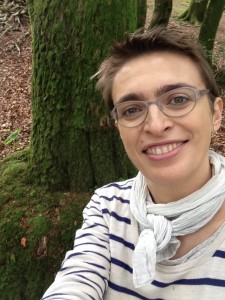 Have you ever experienced a situation, which didn’t let you go for some time after it happened?

About a month ago I was walking down a pedestrian street in Aalborg with my husband and somebody caught my attention. A handsome blond man with big blue eyes was walking along many other people in the opposite direction to us and was staring at me. He was probably one of those young students who have an extra job to earn some additional money with distributing various prospects on various products to the passers-by. He had a number of such leaflets in his hands but he forgot to distribute them. He was just staring at me.

I was confused and looked at my husband who didn’t notice the man. Michael smiled at me. “So, nothing wrong with my face or appearance, if Michael smiles,” I concluded.

I sought in my memory if I knew the man. I couldn’t find any hint or any face that would remind me of him.

He long passed by while I was still searching in my head. He also didn’t try to talk to me. So, who knows why he stared at me for that short time. Maybe I reminded him of someone. I will never know.

But my thoughts were coming back again and again to this man and his look at me. This started worrying me. Why was I thinking of this man? My relationship to my husband is as harmonic as one could wish for. We have our ups and downs, but we take care of each other and are honest with each other. Being best friends and lovers at the same time helps a lot.

But, this man. Why was I thinking of him again and again? And then it hit me: “He is one of the main characters for one of my future novels!” It will be actually a sequel and I have a rough story for each of the books as well as the protagonist, a young woman in her twenties-thirties. But the love of her life was a bit diffuse. Until that moment. I always thought that he would be dark eyed and dark haired like my husband and also my childhood ideas for the most handsome man (although I did fall in love with or had a crush on men of very varying appearances in between: blond, bald, blond and bald, bald and dark, dark and not bald, grey and red haired, etc.). But I was wrong, her love is blond and has big blue eyes. And she will meet him when he will be handing out leaflets on the street and forget to hand them out because he would be simply swept by her sight.

As soon as I had this idea, the man stopped “hunting” me in my thoughts. And at this moment I realized something. Many people do stare at me and others time to time. But we don’t notice everyone staring at us. Not every awkward or funny situation catches our attention. For a writer, the situations or people catching our attention and not leaving are most probably the “writing material” and already inhabit our writing world, even if we don’t realize it at first.

Conclusion: I am a writer, so my mind is on a permanent hunt for characters, settings and scenes.

And this was true before I became aware of this and even before I started writing regularly a year and a half ago.

As soon as I realized this I relaxed a lot and enjoyed my attention being caught by various people and situations. I have walked by another young and handsome man in a Santa Claus costume, in the middle of August. I couldn’t stop smiling at the whole situation, seeing him walking down the street alone in his red hat and jacket, without a beard. He grinned back and said hello. I answered.

This was after my discovery of the permanent hunt, so I immediately started considering if his appearance would be closer to the love of my protagonist. The Santa Claus was also blond and blue-eyed, but he was much taller and his eyes were not as big as of the “leaflet” man. And the answer came: “No, the Santa Claus will be a minor character, but he will influence the way my protagonist and her love interact with each other and finally come together.” The scenes started to evolve. I hurried with a happy pace home and wrote down these ideas.

I guess, this is how it has always been. Stories and situations hunt us and catch our attention and then we are eager to tell them. Centuries ago story-tellers set on stones and benches and told the stories to anyone who would listen. Today, in the hurried world, these stories are rather recorded than told. But the process is still the same. It is just that sometimes we take these situations too personally and think that we did something wrong. But all it is about, is that there is a constant hunt: we hunt the stories that bring our creativity and us further and stories hunt us to be brought to life.

Enjoy the hunt, everyone! You might be living an exciting story right now! Actually, I am sure you are. Just look around.

Pictures: Five brilliant settings, all at the same place: Tivoli in Copenhagen. So many ideas are whirling in my head.  🙂 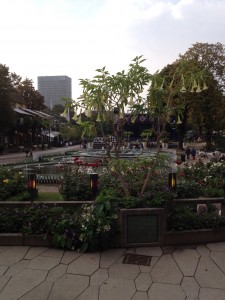 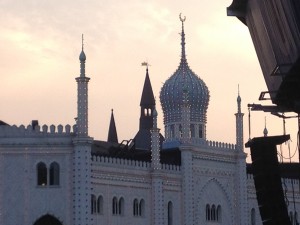 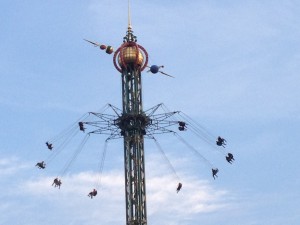 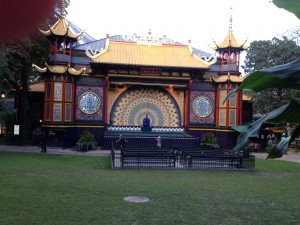 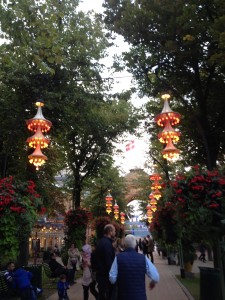 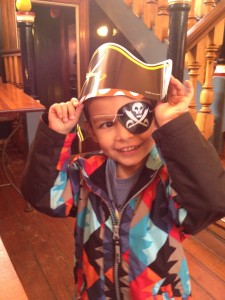 My son Niklas visited my colleagues in the office with me today. Since I haven’t seen all of them for a while, I got many hugs.

After the second hug from my colleagues, Niklas hurried with open arms to me and gave me a big hug, too.

Picture: The sweetest pirate ever.

Today is a day of a very short post. I looked through some of my notes and found one I have written in an e-mail to my niece and my sister in April this year. Here it comes:

It’s fun to see how an idea turns into a snowball and ignites very nice, cute, crazy, sweet and unexpected associations and ideas in others. This is a true award of sharing one’s writing.

I am grateful to all who read my blog! It has been amazing to be able to share my writing with you and get a lot of encouraging feedback and inspiring thoughts.

Picture: One of nature’s gifts to us. A never seen abundance of yellow boletus on the outskirts of the troll forest nearby. 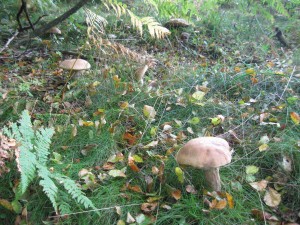 I discovered the following quote this week:

„Happiness is like the sun.
There must be some shadow,
so that we feel well in our skins.“     Otto Ludwig

I caught myself coming back again and again to this thought. It felt so wonderful to realize that those seeming setbacks from a line of euphoria about the glory of life are not bad at all. They are in fact necessary. In order to take a deep breath, to take a break and realize the beauty of life.

Today, I made a little experiment. My parents-in-law came to spend several days with us. Being a true extrovert, I like telling stories, drawing attention to myself. I did this a few times today. I wanted to share what I thought was interesting. But then, when I became aware of this, I “stepped back” and let everything unfold in front of me. It was so wonderful to listen to my parents-in-law and let them tell us about their vacation so far, about their way to our home, to see how they talked and played with Niklas, to remember many wonderful moments we spent on various occasions together.

Now I realize better, why I like the rain and being in the shadow. When I pictured myself on a hot day, I understood that I most enjoy the sun when I sit in the shadow, not when I stand in the glowing sun.

Let all your shadows bring you satisfaction, wonderful perspective on the happy moments and peace of mind.

Picture: taken in the park near us on a rainy day. 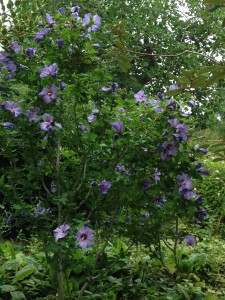