I love languages. I think they are like various sides of a diamond, all letting very special light and glitter to shine through them. But I always wondered what my favorite was. My father was in love with French. My mother is devoted to our mother tongue, Romanian. My sister, my niece and I grew up with Romanian and Russian. Nowadays, I poke my nose in about thirteen languages, of which in five I can understand and be understood.

A few weeks ago, I finally admitted to myself: English is my favorite. My wish to write in it makes it pretty obvious. And I guess, one of the reasons for the love of it was my English teacher. Valentin Ignatievich Jeleapov was my all times favorite teacher. He was a good friend of my father and after my father died, he became a father figure to me.

He used to give me his salami sandwiches. He engaged me into the work on our school museum. I gave guided tours in this museum. It was my first school of speech. I spent a lot of afternoons at school after the lessons and remember fondly those days.

The teachers in Soviet schools didn’t have much possibility to improvise, because the school program and material were prescribed. The text books were not very exciting. Foreign languages were not an exception. Most of us thought we wouldn’t have a chance to use them.

Only after finishing school and after Perestroika years, I learned how much passion Valentin Ignatievich had for English. I started teaching English to adult beginners, and upon advice from my mother, I brought him all the material I gathered and received at the University and from English friends I was lucky to make in Moldova during my years of study.

But there was one special “English” lesson we had with Valentin Ignatievich, and which I will never forget. It happened every year on April 12. It was done in Russian. We were not asked to read our assignments during those 45 minutes, although we were always told to prepare diligently, also for April 12.

On that day, Valentin Ignatievich told us how he and his fellow students experienced the day when Yuri Gagarin went to space as the first human being. He told us how his professors called off all of the courses and seminars, and how hundreds of students were extremely quiet listening to the report on the radio of the Gagarin’s flight and his landing. He shared with us the emotions he and his friends were living through on that historic day.

I loved those English lessons on April 12. I asked my sister, who is eight years elder than me and who learned her English with Valentin Ignatievich, too. She reported of the same experience. My friends from other classes said the same. This was an unofficial tradition at our school. And it was way out of program and rules.

In the seven years of learning English with Valentin Ignatievich, two times a week, I had several occasions, on which an English lesson for me and my school friends fell on April 12. And I was always glad to experience it again and again.

Valentin Ignatievich told us the same story every time, but the way he told it to us was always new. New sparkle, new detail came every time. I will never forget those special lessons. Every year, on April 12, I remember them with a smile. That is why I write this post. And that is why I created a scene in the novel I write about my father, inspired by my teacher’s story.

I was also glad to learn and experience two other things, occasions, connected to April 12. My mother told me that my father, if he would ever have a son, wanted to name him Yuri, after Yuri Gagarin. And my PhD exam was on April 12, 1999. When I learned that my exam was put on this particular day, I knew that everything would be all right. I was still nervous. But the memory of my father, of my English teacher, and the fact that I defended it in English, made this day very special, festive and unforgettable.

Picture: my father at his PhD defense in 1971. One year before I was born. 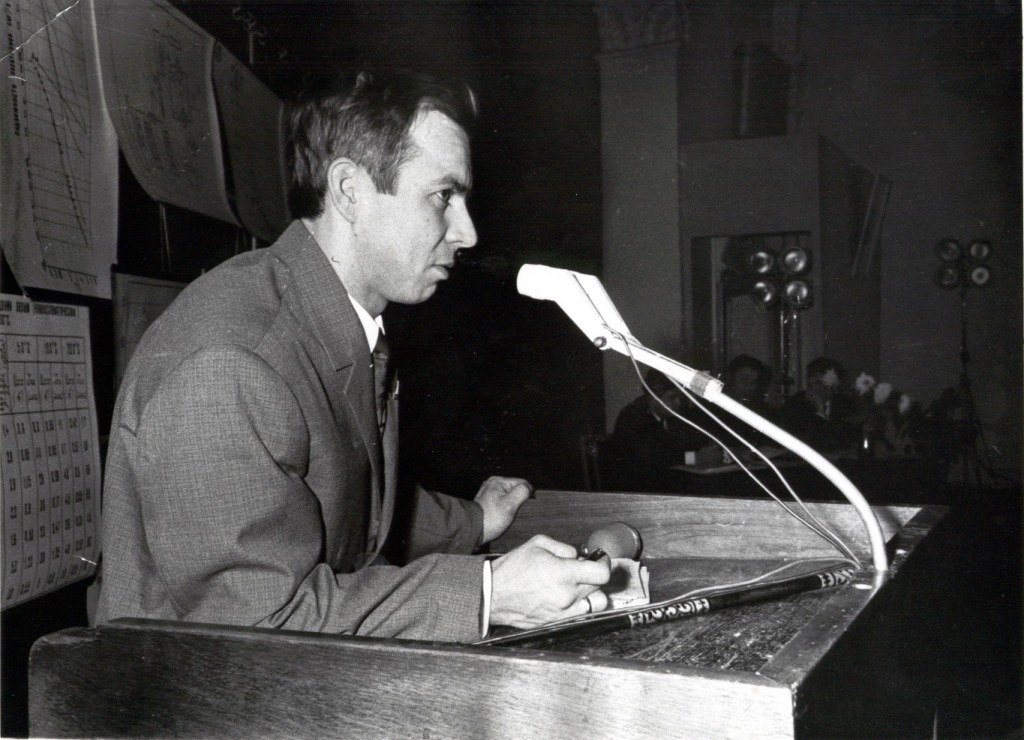