Ingrid and Alice stood up in unison, Steve’s head tilting after Ingrid. Alice took the mugs to the sink, while Ingrid released the brakes on Steve’s wheelchair. Before she pulled the wheelchair away from the table she patted Steve’s hand, which he seemed to have readily placed on his shoulder for her to reach.

The noise died as Alice closed the door after Steve, Ingrid and herself.

Elizabeth cringed. The silence was deafening.

This is not how she imagined a family reunion.

Not that she expected one.

Elizabeth didn’t think she would find anyone from her family here. She actually didn’t know now what she had expected. Had she ever grasped her wish into words? Elizabeth wasn’t sure.

Her father told her about her mother’s death when she was small. But he never mentioned a son.

And now Patrick, the “mad” mad, was her brother.

Elizabeth stole a glance at him.

He stood at the same spot, which he occupied after letting Alice, Steve and Ingrid out.

When he gazed at them a minute ago, he looked so scared. So lost. Like a small boy. Although by now Elizabeth was sure that he was older than she was. And she now guessed, whose elbow was touching her shoulder on the photograph she showed to Alice and Ingrid.

Oh no, the photograph! Elizabeth glanced at the table. How could she take it back without Patrick noticing?

She glanced up and discovered that Patrick watched her but in the next moment he seemed to check where her gaze had been the moment before.

Too late, he saw it.

Patrick made a step to the table and took the picture.

He gripped it with both hands, his jaw moving from one side to another.

Then he did something strange. He looked closer at the photograph. But not this was strange. The way he did it was strange. He bowed his body above the picture instead of bringing it closer to his face.

Elizabeth couldn’t make out Patrick’s expression. She saw only his high forehead, dense brows, pressed together, and skulls moving.

Shiver ran along Elizabeth’s spine in spite of the warm air full of chocolate aroma filling the large kitchen, which Elizabeth recognized being the living room when she was small.

Patrick look up, his eyes glazed. He squeezed his eyelids shut and then released them. “Why.” He paused. “Why did you come?”

“What happened when I was small. I don’t remember anything from here. I mean…inside. I remember how the house looked from outside. But not exactly how it used to be inside. How…we lived here.” She looked at Patrick hoping to ignite at least a little compassion in him. “I must have been old enough to remember something. But I don’t.”

“Oh that’s simple.” Patrick’s cold gaze returned, however mixed with something undefinable, as he took a chair at the opposite side of the table. “You fell of the roof.”

Elizabeth felt her eyes opening as never before. “I fell…of the roof?”

“What? You…” Elizabeth found all her face muscles gathering somewhere around her nose. “But why?”

“Because you were stupid and I hated you.”

Elizabeth took a deep breath and looked at Patrick in disbelief. His look was on the picture, which he still held in his hands.

“I don’t believe you,” Elizabeth said.

“That’s your problem.” Patrick shovelled the picture toward Elizabeth along the table top. “Now, that you know what happened, you can leave. You are not wished here.”

A lump of something appeared in her stomach and started to raise inside her. No, not tears. It was anger. And a very strong one.

“No, dear brother, you won’t get rid of me so easily.” She crossed her hands in front of her. “What did I do as a child that made you hate me. And as it looks still make you hate me?”

“You were just stupid. That’s all. There is nothing more to that.”

“Owe you? Since when? Since our dear father took you away from us…from here? You probably used to idolize him, right?”

Elizabeth drew another deep breath but didn’t manage to answer, because Patrick hit the table top with his forearms as he supported himself on the polished surface.

“And I bet you still do,” Patrick said. He leaned back in the chair. “So just go back to where you come from and live further in your fairy tale of a story. What was here is none of your business.”

“It is my business and I bet I have a right to this house as much as you do!” Oh-oh, this didn’t go out well.

“Is this is what your visit is about? To get money out of the house? Not the honourable”, Patrick grimaced, “finding and reconciling with the long lost family. Ha! You know what? Just go to the court and claim a part and let the lawyers do the talk.” Patrick stood up. “I’m done with you. I guess you will find your way out.”

“Patrick, wait! This is not what I meant.”

“It doesn’t matter.” He took a step to the door and was surprised as it almost hit him in the face.

Alice stood at the other side. “Oh, I didn’t see you. Sorry!” She measured him with a concerned look. “Are you all right? Did I hit you?”

Patrick grabbed the door knob. “No, no, I’m fine. I was just finished here and wanted to do some urgent things and—”

“Claire wants to talk to Liza.”

Elizabeth frowned. “Who is Claire?”

Alice looked at Elizabeth, at Patrick, then back at Elizabeth. She put her left hand on Patrick’s covering the door knob and the right arm on his other arm. It was as if she knew what just happened here and as if she was trying to stop him from leaving. Then she said turning back to Elizabeth, “Claire is Patrick’s and…your mother.” 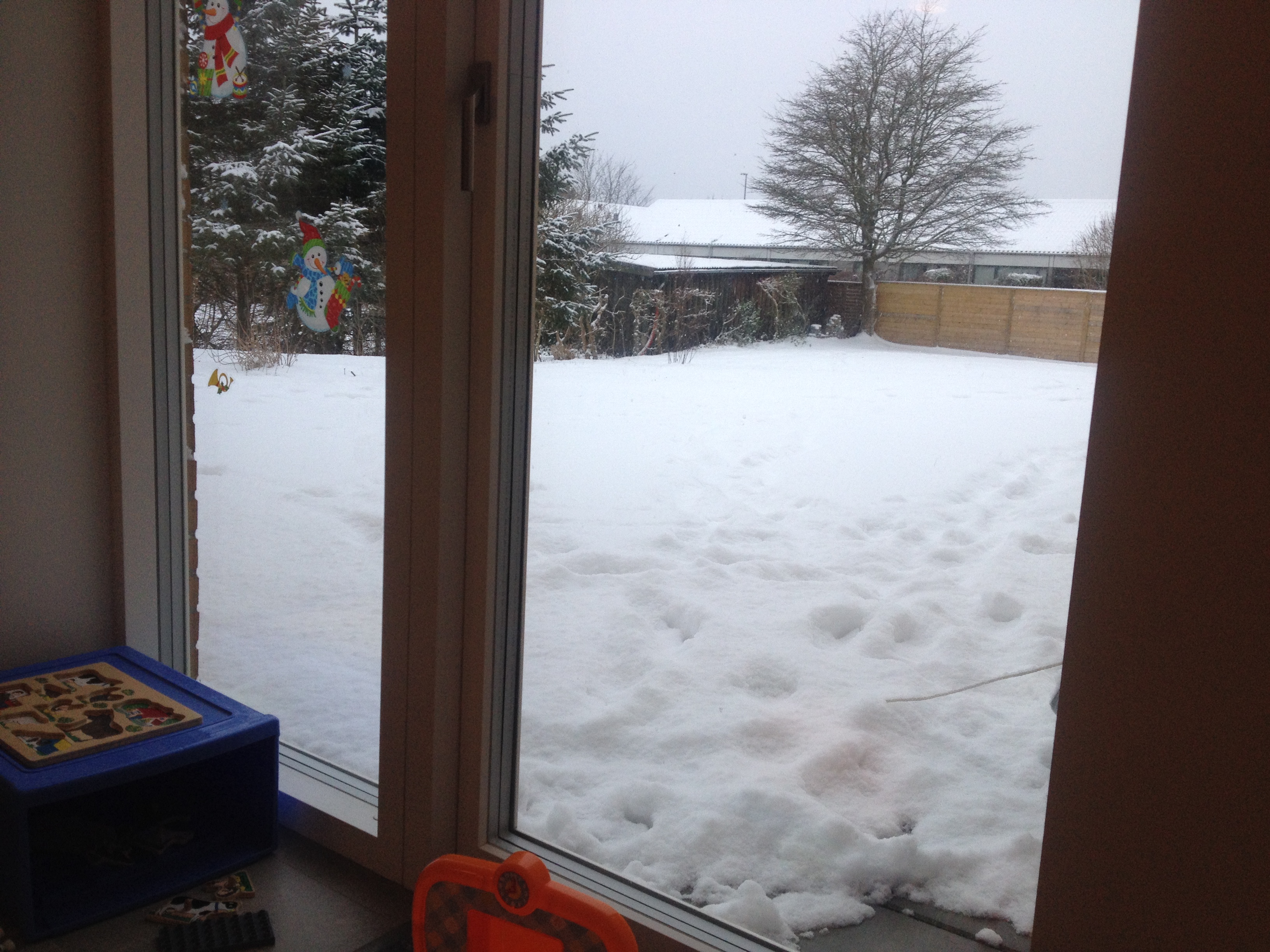 Picture: Snow in our garden.

P.S. Chapter 10 will be written and posted latest in two weeks time.

P.P.P.S. If you think you have friends who could like this story, then let them know about it and forward it to them.