We didn’t know of Mother’s day there. Instead, mothers were congratulated with the International Women’s Day, on March 8. As for Mother’s day, women, and especially mothers and wives received flowers and small gifts from their husbands and children. As here, children were drawing pictures and writing cards for their mothers. As my mother moved to Denmark to be closer to us, she brought with her from Moldova a notebook I made for her and my sister on this occasion. It was sweet to see what words, pictures and poems I found, wrote and quoted to honor the two wonderful women, who brought me up after my father’s death.

One 8th of March remained in my memory. I was a teenager then. I think it was a Saturday, because I was not at school, and the first thing I was sent for that day were groceries. It was my turn. I went for smaller rounds, while my mother and my sister went for bigger rounds, when more things needed to be carried. Sometimes we went together.

On that particular Saturday, March 8, while standing in queue for fresh bread, I noticed something unusual. There were almost no women in the stores except the shop assistants. Only men were there. And most of them looked quite lost. I realized then, that on other 364 days (minus Sundays) mostly women went for groceries. You could see men standing in queue to give back empty bottles, but the rest was done by women.

Especially the picture of the most of men being still half asleep and looking lost, not knowing where to find which product, or what they were supposed to buy, was very amusing to me.

With time this picture changed, but how much different it is today in Moldova from then, I am still yet to find out. I haven’t been in Moldova for more than thirteen years. So, everything will be new for me when I go. And I will definitely go. Just don’t know yet when.

My husband and I tend to forget Mother’s Day as we know it today. I guess partially because it is not a fixed date in the year, as March 8, and partially because we grew up with a different tradition. And old habits, especially those from childhood, do not change, or not so easily anyway.

But I was lucky that my mother spent almost the whole day with us yesterday. And as soon as we remembered that it was Mother’s day, we invited her for dinner. My son was so happy to have his Bunica for a bit longer with him. We all had a lot of fun.

Being a mother myself, I love everything that relates to this day. I am so happy to be a mother. There is nothing that can compare with this feeling. And smiles, hugs and kisses from my son were the best possible gift I could get on this day or any day.

A happy Mother’s day week to all mothers! As I read somewhere yesterday: “Every day is mother’s day!”

Picture: My mother in December 1960, a year before my parents met. I am not surprised my father fell for her. 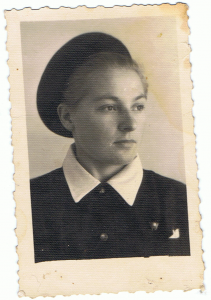