We often evaluate what we have said, sometimes long after the listeners have forgotten what we were talking about. And we judge ourselves for the word choice.

My son reminded me last week how sweet “the wrong use of words” can be and how much fun playing with words is.

One of the wonderful memories in this respect is connected for me with teaching English to beginners. One of the courses I taught was at a large hotel in the center of Moldovan capital, Chisinau. The staff of the hotel had to learn English, and their abilities to talk English at the end of the course would determine how secure their jobs there would be. More and more foreigners were staying at this hotel and English skills were essential. All of my students were elder than me, some of them close to my age but most of them at least two times my age at that time, which was beginning of my twenties.

One of the assignments I gave to my students was to describe their homes. And one of the students, who was a bit more advanced than others, but wasn’t trusting herself in this, made a wonderful description of her home. She used some beautiful details describing colors and shapes in various rooms. She was truly in the moment and thinking in English. I knew this as soon as she named kitchen “cooking room” without realizing it. It was just a logic thing to say. She didn’t even stop to search for the “right” word. She just said: “cooking room”.

I loved that and pointed this out to her when it was time for me to evaluate her presentation. I was touched how proud she was to realize that she could think in a foreign language and make herself understood even if she didn’t have all the words “at her hand”.

My son reminded me last Friday of this wonderful encounter. He, my husband, my mother, who lives close to us, and I went to an adventure park not far from the city we live in. It was a bank holiday and we enjoyed sunny and warm weather. Shortly before the park closed we re-discovered the airplane carousel, which my son enjoyed last year. So, we hurried to test it again. Moms and Dads were allowed to join in one of the two seats on an airplane. Niklas asked me to fly with him. I agreed.

Immediately after that I got some instructions. Niklas has forbidden me to touch the handle that makes the plane goes up or down as it circles with the merry-go-round. He claimed the handle for himself. I happily agreed and called him captain. He loved this and took on this role immediately.

I had a big smile on my face and such a wave of warmth at the sweetness of this sentence. It was perfectly clear that I was supposed to sit behind him.

These sweet encounters and realization, that a “wrong use” of a language could be sometimes more fun, allowed me to dare to write in a language of countries, which I visited only briefly, but which I deeply respect and language of which I love and cherish. Help and support from my friends who are native speakers in English is absolutely inspiring and encouraging.

Just the day after my sweet experience with my son, my writing teacher, dear friend and a wonderful author, Menna van Praag, has praised my fellow students from Germany and me on our English skills. It was at one of her monthly writing seminars, which I immensely enjoy and at which I learn a lot. She liked the way I structured sentences to enhance the emotion and feeling in a scene. And she praised me on my word choice. One example made me smile. I have written the following paragraph searching for reasons of the feelings the main character has for his fellow student at the university:

“One of the reasons may lie in her constant merriness. And carelessness. People around her often appear grim and unhappy in contrast to her smile and lightness. All troubles of the world seem to pearl up and flow off her like heavy raindrops on a windowpane. I forget my worries with her.”

Menna’s comment to this was: “Lovely structure. I don’t know the expression “pearl up” do you mean “peel off” or is it a new one on me? :)”

I tried to figure out where I first heard the expression “pearl up”. I couldn’t come up with the exact source. It might be from my time and interest in semiconductor and material science. I read an article long time ago about so-called lotus effect, which allows the lotus leaves to always appear clean and free of dirt and water stains. A very specific structure of the leaf surface does not allow water to adhere to it. Water gathers in large drops, reminding me of “pearls”, and carries the dirt rolling off the leaves. This inspired some of the car building companies to create similar surface structure on the wind-shields, so that they would remain clean and needed less washing, which in turn would save water consumption.

I don’t know if I will keep the expression “pearl up” in my novel or not, but the smiley from Menna strengthened me in my will to continue writing and playing with words in this language, which doesn’t feel that foreign to me anymore.

Wishing all, who read this, joy in using whatever language you wish, whether the one you were born into or chose to speak or write in!

Picture: On the way home. 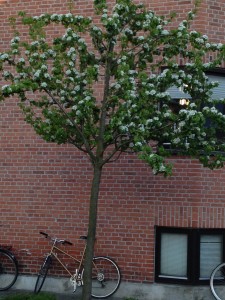