Yesterday on a train ride from Århus to Aalborg, together with my son, I saw a boy and his younger sister, both in the beginning of their teens. They set at the opposite side of the aisle. Both were pretty rough with each other. Slapped and pushed each other, but laughed at the same time.

Niklas was watching fascinated. I concluded to him and to me, “They are just bored and can’t find an occupation, which can interest them here in the train.”

But were they really bored? It might have been also my interpretation. Niklas revealed my resistance against their behavior by saying, “They just make jokes and fun.”

Although I still disapproved the way the two children treated each other, I had to admit that I was afraid that my son would copy them and be as rough to his sibling coming in December or his friends.

So after recognizing that my reaction was dictated by this fear, I stopped resisting, which I had to do several times because the fear was coming back, and read in a magazine or looked outside of the window and enjoyed the changing view of fields and villages we were passing by.

Something interesting happened a little bit later. The lack of my attention to them, which I paid by glaring at them at the beginning, led to two occurrences. Niklas stopped watching them and started playing with my hand as if it were a robot’s hand. We both enjoy this game. Second, the two children changed seats farther from us and closer to the exit.

Today something else happened which made me think about boredom. I read two e-mails from a new member of the meet-up group I have initialized in Aalborg. The man wrote that he moved to Aalborg in February and claimed the city to be boring so far. He also suspected the fact that only three people were planning to meet coming Friday, promised the meeting to be boring as well.

These e-mails became a puzzle to me, which I was eager to solve in the first minutes after reading the mails. I noticed that I became a bit too involved and thought of defending of what our meet-up is about.

But when I tried to understand what boredom was, I could look at these messages remotely and calmly.

I found the following synonyms to boring: dull, repetitive, or tedious.

It is interesting that the word boring is sometimes understood in an absolute way, but the other three words do sound as labels. And as soon as we hear a person using an obvious label, we know that his or her opinion is very subjective. This led me to another thought: boredom is not objective. It never can be.

So, what do I have to do to be bored? I just have to complain that where I am or what I am doing is not where I want to be or to do.

And this is what this young man joining our meet-up didn’t recognize yet. His resistance and complaint about coming to Aalborg prevents him enjoying life here and discovering wonderful people and beautiful surroundings.

It was interesting for me to discover that boredom goes hand in hand with complaint.

In train I didn’t have this recognition yet. But by doing what I liked I could forget my complaint and leave those seemingly dull and tedious things behind me.

Picture: I will never get tired of books. If I start complaining about one in my head, I know I can always find another which will fascinate me. This big book in Astrid Lindgren’s World in Vimmerby fascinated me as soon as I saw it. 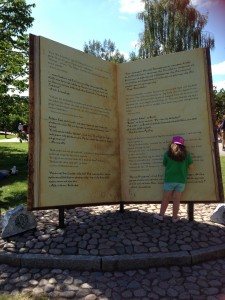