Since we are relatively new in our new house, for about four months now, the lamps play a considerable part in our lives and in our conversations. We discuss which to buy, where to install them, which to install first, and which later.

We even started evaluating them according to their speed.

At lunch past Saturday, Michael (my husband) and Niklas (my son) discussed which lamps are the fastest.

Mind you, not the light, as I tried to point out. They were discussing lamps.

Niklas said the Road Runner lamps and the Speedy Gonzales lamps where the fastest.

“What about the headlights on our car? Are they as fast?” asked Michael.

Michael nodded. “No, you’re probably right, those of Road Runner and of Speedy Gonzales are faster.”

Niklas objected again. “But yes, the lamps on our car are fast! They are faster or at least as fast as those of Road Runner and of Speedy Gonzales.”

My attempt to claim the light to be the fastest of all, whatever the lamp it was coming from, was to no avail.

Apparently the lightning is even faster, according to my five-year-old son.

My ten-months-old daughter, Emma, is as excited about lamps as the rest of us.

Often when we enter her room, she searches the ceiling light with her gaze and a big smile, whether it is on or off.

And she confuses the German word “langsam”=”slow” with the word “Lampe”=”lamp”. Every time I ask her to take it slow down when she drinks out of her cup, she looks up, searches for a lamp and says, “M-p-p” or “M-p-pa”.

Picture: A selfie with Emma in her room and her favourite ceiling lamp. 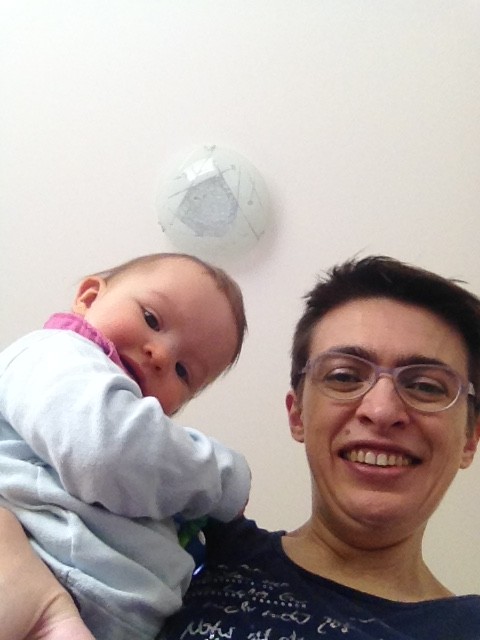